Some of Australia’s most vocal and divided advocacy groups have come together with a unified voice to demand a royal commission into the dysfunctional Family Law System.

In an unprecedented move, men’s and women’s rights groups, child protection and sexual and domestic violence advocacy and support organisations, have put their differences aside to find common ground on an issue which is devastating the lives of vulnerable children.

Bravehearts Founder, Hetty Johnston AM, said the collaborative approach was a positive step to bring about urgent reform, following the Prime Minister’s decision to deny a Royal Commission into the Family Law System.

“This is history in the making, and we applaud these groups for seeing what the Prime Minister cannot – that a Royal Commission is the only framework capable of reforming the Family Law System,” said Mrs Johnston.

“It speaks volumes for how dire the situation has become, when people with strong and opposing views, set aside their differences of opinion for a common goal to help protect children from this toxic institution.

“It’s hard to find anyone who doesn’t agree that a Royal Commission is the only legal framework capable of overcoming the constitutional, legal and jurisdictional hurdles, of getting to the truth on how to fix it.

“We have said all along that this has nothing to do with gender and parents and everything to do with children who are caught up in the crossfire. These kids are casualties of war in situations they often don’t understand and are being traumatised by the decisions made in a system where their human rights are blatantly violated.”

Anti-domestic violence campaigner and 2015 Australian of the Year Rosie Batty, said the lack of transparency in the current system was leading to more children being harmed.

“There’s a lack of transparency and a ‘cloak of secrecy’ around the family law court which is allowing a toxic culture to permeate,” she said.

“Egregious decisions are being made by so-called experts and children continue to be harmed as a result. This must be addressed as a matter of high priority by the government. I support Bravehearts and its call for a Royal Commission into the dysfunctional family law system.”

President of Lone Fathers Association Barry Williams said the Family Court was ‘failing to do its job’ and believed a unified approach was required.

“We’re an organisation that doesn’t discriminate against women and puts children first – that’s the most important thing,” said Mr Williams of the organisation he founded 44 years ago.

“This government is failing the rights of those children due to an unaccountable family law system, which is failing to do its job. We must reform this system and turn focus to the best interests of children by way of educating and supporting fathers, mothers, grandparents, relatives, and extended family.”

Tyrell Moore is the founder of Sole Fathers United. A former Youth Justice Worker with the Department of Human Services in Victoria, Mr Moore said the mental health of children and parents continued to be threatened due to outdated legislation and a lack of accountability.

“I’m a strong advocate on family law reform, particularly around the 1975 Law Act, which is outdated and does not serve its original purpose. The system oversees orders which are in essence just a piece of paper, and there are no repercussions for perjury where parents lie to the detriment of the safety of children,” he said.

The National Council for Single Mothers and Their Children said it’s aware of children who are forced to return to their ‘place of abuse and the hands of their abuser’.

“We stand with Bravehearts and their call for a Royal Commission into the family law system,” said the organisation’s CEO Terese Edwards.

“Our system ignores and can penalise the voices who seek to protect, while it trivialises the breadth, the impact and the prevalence of abuse.

“The family law system is a powerful entity, and it has a duty to ensure that safety is granted supremacy above every other consideration, and in all of its deliberations. A Royal Commission is required to shine a light on the dark workings of a system that has failed too many.”

Bravehearts recently obtained constitutional legal advice which contradicted Prime Minister Malcolm Turnbull and Attorney General George Brandis’s reason for rejecting a Royal Commission –the same Attorney General who voted that paedophiles should be able to keep their passports and therefore an opportunity still existed to engage in child sex tourism.

Mrs Johnston said the current Parliamentary Inquiry into a ‘better family law system to support and protect those affected by family violence’ is a ‘toothless tiger’.

“Unfortunately this Committee lacks the power to fully investigate the truth, to ask the hard questions of those holding the positions of power who need to answer them,” said Mrs Johnston.

“This Committee, however well-meaning and genuine its members may be, found itself incapable of hearing Chief Justice of the Family Court Diana Bryant or Chief Judge John Pascoe because it felt it risked offending the Doctrine of the Separation of Powers.

“Only a Royal Commission can overcome these hurdles. But instead, the government is wasting tens of millions of taxpayer dollars on quick-fix solutions that tinker at the edges of this totally broken system.

“Diana Bryant continues to deny that systemic issues within the system are putting children being at serious risk. This culture of denial must shift, and new leadership which focusses on the best interests of the child cannot happen soon enough.”

A change.org.au petition for a Royal Commission led by a desperate mother whose daughter Abbey took her own life following family court decisions has attracted almost 90,000 signatures. Add your voice NOW. 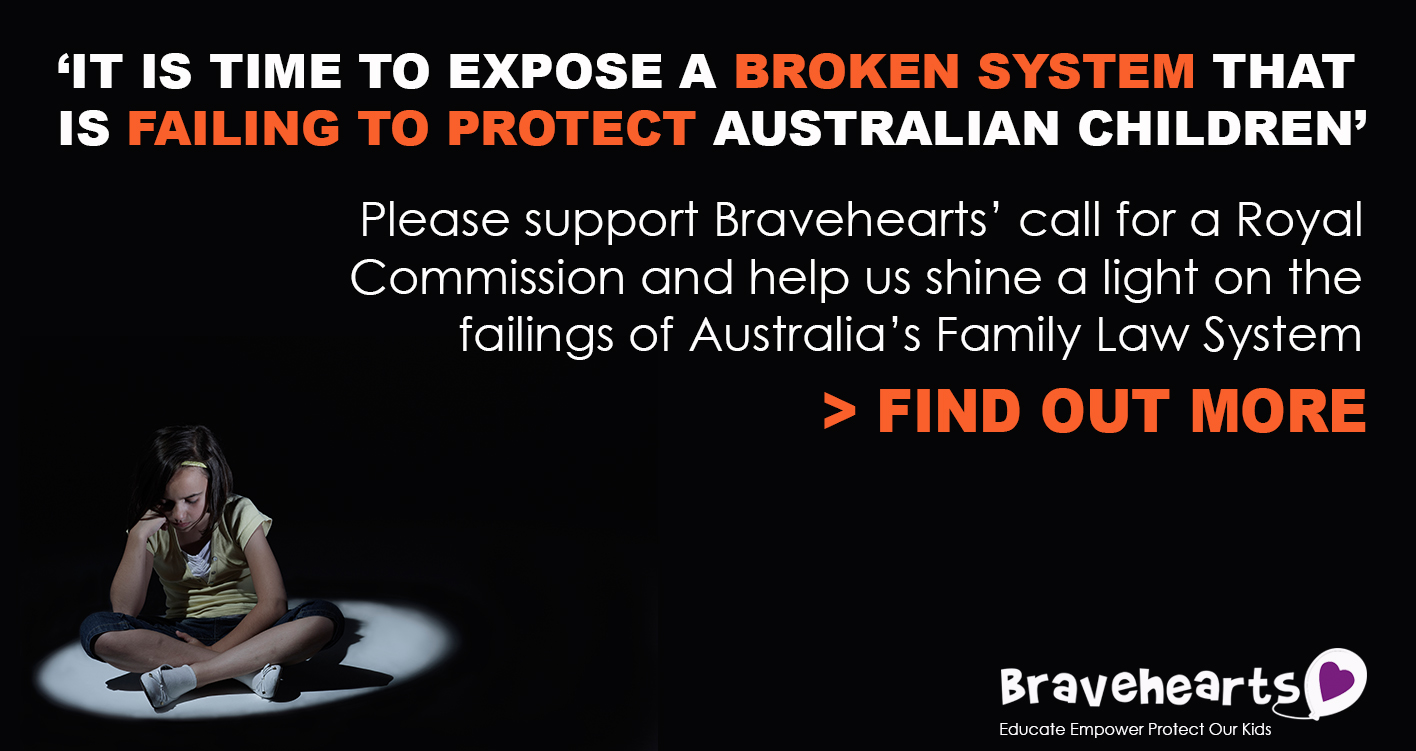