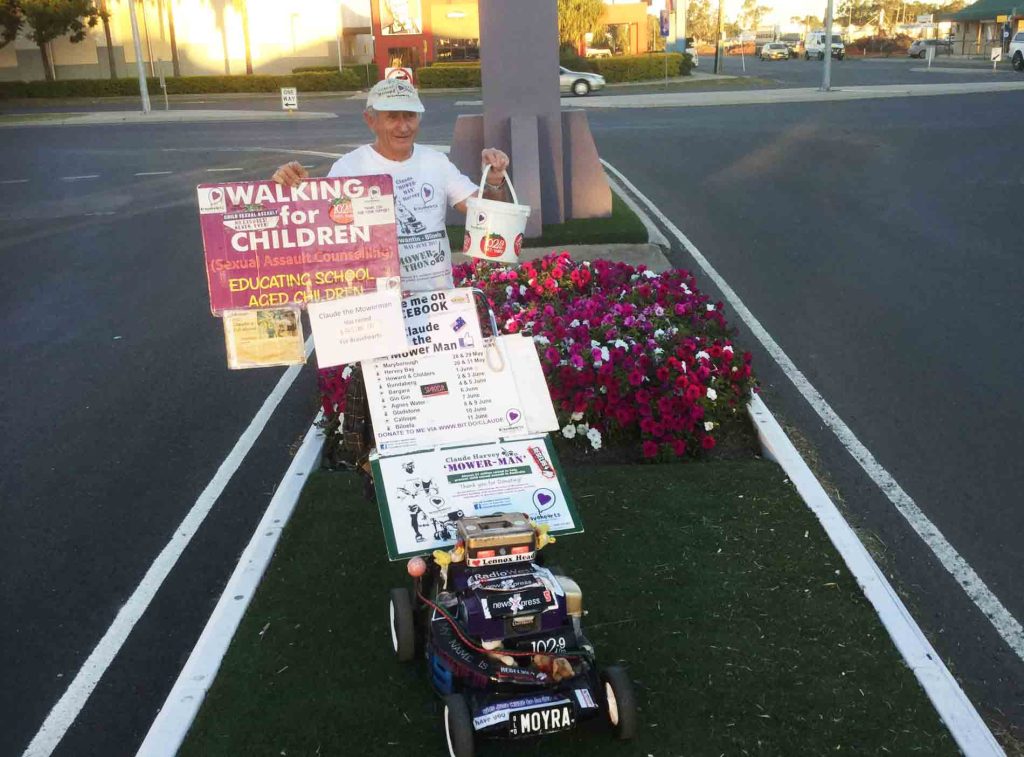 Claude’ The Mowerman’ Harvey OAM is a real-life superhero for Australian kids, spending his retirement trekking nationwide to spread awareness of child safety and raise funds for Bravehearts.

This March, 74-year-old Mr Harvey will embark on an epic Victorian regional tour, commencing on Monday, the 9th of March and finishing over 1,200kms and 38 days later on Friday the 2nd of April in Ouyen, contributing to his goal of raising $2 million for the charity by 2022.

Claude has travelled many thousands of kilometres throughout Queensland, New South Wales, Victoria, Tasmania and Western Australia and has raised a staggering $1.3 million to help Bravehearts protect Australian kids.

While most Australians his age have their feet up, enjoying their well-deserved twilight years, Claude says he is happy to be able to contribute to the community through awareness and fundraising.

“Although fundraising is a big part of my tours, raising awareness of this horrendous crime among as many communities as possible to help prevent child sexual assault, is my primary mission,” said Mr Harvey.

“Ditto’s Keep Safe Adventure Show stays in kids’ hearts and I’m very excited about my upcoming tour and having the opportunity to talk with people about Ditto and how communities can help protect their children including supporting the wonderful work of Bravehearts.”

“If I can save just one child from a crime that harms 1 in 5 Australian children, I will have achieved what I’ve set out to do.”

Renowned throughout Australia, Claude is sure to draw a crowd in each of the towns he visits as locals gather to see the man himself and his trusty mower ‘Moira’.

Claude will visit with community leaders in each town he visits, and talk with locals that cross his path while inspiring donations from those with a few dollars to spare.

Bravehearts founder Hetty Johnston AM says Bravehearts is fortunate to have the support of such an avid contributor like Mr Harvey.

“Claude has made and continues to make an extraordinary contribution to child protection in Australia, with every dollar raised devoted to Bravehearts’ child protection programs,” said Ms Johnston.

“For more than 12 years Claude has dedicated his twilight years to Bravehearts and child protection and we are forever grateful for his remarkable contribution. We hope everyone will welcome Claude – our true-blue Superhero and a national living treasure as he continues to give his all to support Bravehearts in our Mission to prevent child sexual assault and exploitation.”